So over last weekend I was lucky enough to be involved in the beginnings of making a Margaret River Sparkling White. Unfortunately when you pick Chardonnay grapes it has to be done at 2am, but I guess I can put up with that for one day haha. We went to see the vines first and get the low down on how it is all done as you can see below they are picked using an odd piece of machinery that agitates the vines and then spits it out to the next lane onto the back of a tractor that has big orange tubs. 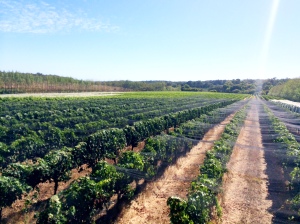 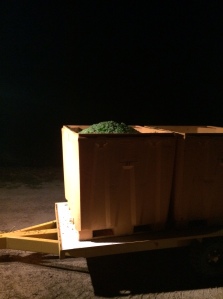 Once the six tube where filled they were trucked off to the wine making place. Where they were tipped into a large container that had a screw like bottom that slowly pushed the grapes into a large machine. This machine separates the grapes from the stalks and pushes the grapes into a large hose, that goes through a massive chiller and then into another large machine called a press. This process takes a few hours and eventually pumps the juice into large vats to be processed and turned into wine. After a few tastes of the juice we decided to head off as it takes a few weeks for this to happen. With a bit of luck I will be able to see the process of putting the fizz in and making it a sparkling. 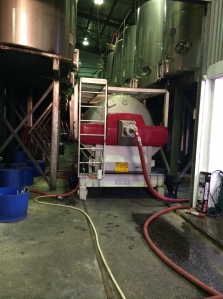