When I ventured over to Melbourne in February I took my lovely girlfriend to a little restaurant called Cutler and Co. This is where I came across Fromage Blanc Cigars, a delicate little cigar-shaped pastry filled with cheese and at either end an olive tapenade and white balsamic gel. However I thought I would try my own twist on this little number. I replaced the cheese with a chocolate ganache and managed to find some edible labels courtesy of Edible Image Printing. I looked at many recipes (most I translated to English from French) but in the end I just made up my own recipe. 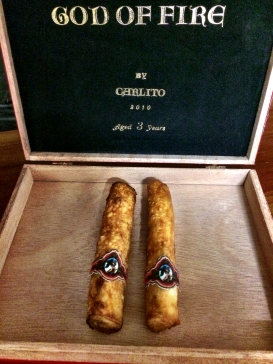 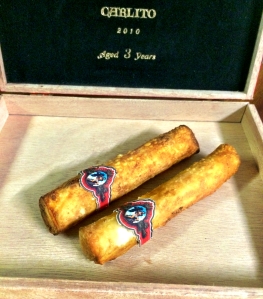 First defrost the filo pastry and whisk the egg in a small bowl, this will be an egg wash. Next you will need a small sauce pan with enough water in it so that when a glass bowl is placed on top the water isn’t going to touch the bottom of it. Put the chocolate in and stir constantly while you wait until it melts. Once it has done so, remove from the heat and stir in the coconut cream. Leave to cool down and for an extra effect at this point I smoked the chocolate with cigar smoke using my smoking gun. 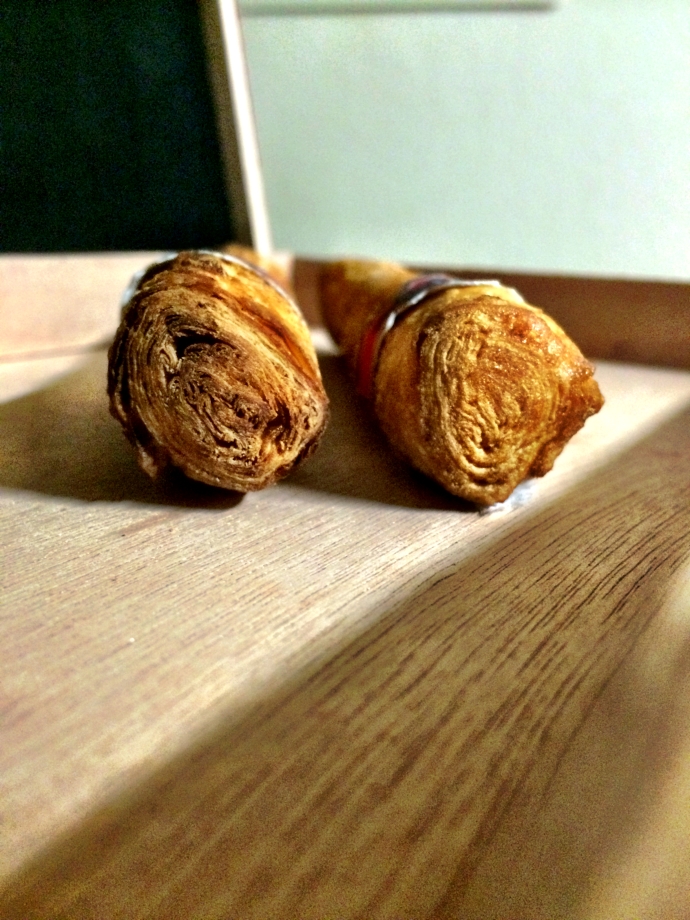 Meanwhile clear a surface, dust with flour and lay a sheet of filo down. Grab a brush and wash the filo with the egg before placing another sheet on top. Repeat until you have a five layer thick sheet. To make the tobacco looking ends roll and squish a few sheets of the filo together until you will have the thickness of the cigar you want (it should look like the picture above). Mine were about one to one and a half centimeters in width. Next you want to cut from that roll three 1 cm pieces two for the ends and once for the middle I found this stopped the cigars from collapsing where the ganache is spooned in.

Place these 1 cm pieces evenly, roughly three to four centimeters apart and spoon some ganache into these 2 spaces. Brush the filo with egg and roll the cigars as tight as you can. Be careful doing this not to tear the pasty. Place on some grease proof paper and put into the freezer to chill. Once frozen cut the ends off so that they are nice and neat. Next you want to heat some canola oil (or you can cook them in the oven) in a pot and fry the cigars until they are golden brown. Let them sit on some paper towel to get rid of any excess oil then leave them to cool and enjoy.

Below is a link to some of the recipes I sorted through and combined to create my own: https://www.google.com.au/#q=cigares+au+fromage+blanc